FASI Inc. is not affiliated with NDC's subsidiary Beta LaserMike™

Established in January 2000, FASI Inc. is an employee-owned corporation dedicated to servicing and repairing Beta LaserMike and Z-Mike/Zygo products. There are 10 FASI technician-owners in 4 locations, each with from 20 to 30 years of experience supporting this specialized equipment. This means that their collective knowledge totals over two centuries.

Don’t Take Our Word For It

At FASI customer satisfaction is more than a goal, it’s a commitment to everyone we serve. We’d like to add your company’s name to this list of satisfied FASI customers. Meanwhile, you may be interested in these customer comments.

Only FASI Provides All Of This 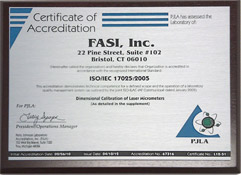 FASI really stands behind what they sell, and they don't forget you after the sale. FASI CUSTOMER